This year we have run out of the Olympics but it is a good time to remember the story of someone who, simply doing his job, spoke very loudly. The fight against racism has been widely claimed in recent days, due to the death of George Floyd. Sport is and has always been a very powerful channel to send this type of message, inspire and help others.

Jesse Owens (September 12th, 1913, in Alabama, United States – March 31st, 1980, in Arizona, United States) was an American athlete competing in speed and long jump races. He is considered one of the best athletes of all time.

Before his sporting successes, Owens already knew first-hand about institutionalized racism in his native America. Because of his skin color, his nation had already made him see that not all men were born equal, and despite his brilliant career at Ohio University, for example, he never received a scholarship from the institution. In addition, there was segregation between whites and blacks, and blacks were prohibited from staying on campus or eating in the same restaurants. However, that was not an impediment to winning eight NCAA (National Collegiate Athletic Association) titles in two years. In 1935, during the Big Ten University Conference, he starred in what are considered “the best 45 minutes in the history of sport”: in less than an hour he broke three world records and equaled one. The record that it established in long jump, 8,13 meters, was unachievable for 25 years.

At the 1936 Berlin Olympics, Adolf Hitler was in power and intended to pollute the sport, using this great event to teach the world the progress of his nazi Germany. He hoped that German athletes would sweep the medal table.

At that Olympiad, Jesse Owens was 22 years old and won 4 gold medals: 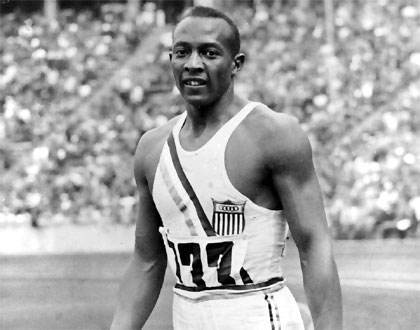 To realize the difficulty of this feat, no one again won 4 gold medals until the 1984 Los Angeles Olympics, where Carl Lewis won four golds, 48 years later.

According to Albert Speer, a former Reich Minister of Armament and War Production, Hitler was “very upset by the triumphs of the American black. Anyone with ancestors from the jungle was a savage; their physical constitution was much stronger than the whites and therefore they should have been excluded from the Olympics.”

Nice example of racism and not knowing how to lose. Although, the story did not end here:

After such a feat, not even President Roosevelt sent him a congratulatory telegram in his country, and on the day of his tribute at the Waldorf Astoria Hotel, he was banned from entering the front door, transferred to reception on the forklift. The United States Athletics Federation withdrew his amateur status for trying to take advantage of his fame in search of sponsors, which ended his career. Owens held various jobs, including running against horses, until he went bankrupt.

1. It is not always necessary to speak, to silence many mouths. Sometimes it is enough to do your job well, and let it do the talking for you.

2. Jesse Owens, no matter how good he was, started life’s career a few meters behind the rest, only for one reason: he was black. Even so, he did not give up, despite all the difficulties he struggled to reach the top, overcoming the obstacles that society had designed. Although this ended up passing over him. He gave to the black community a precedent and to the sports world a reference. Despite everything, it was possible.

3. We live in a society with many demands and moral dilemmas. Sometimes it is difficult to position ourselves in all these situations, and we end up doing it in those that have the most media impact or in those that are closest to our reality and/or affect us. However, there is something that all of them have in common, and it is called Respect. Applying it every day in what we do is the first step to contribute to all these pending claims.

“We all have dreams. Bringing them to reality involves a hideous amount of determination, dedication, discipline and effort” –Jesse Owens