Christopher Michael Langan was born in San Francisco, California (USA), on March 25th, 1952. He has spent his life working as a construction worker, cowboy, farmer and, mostly, as a doorman in a Long Island bar. However, he is one of the smartest men in the world.

To get an idea: 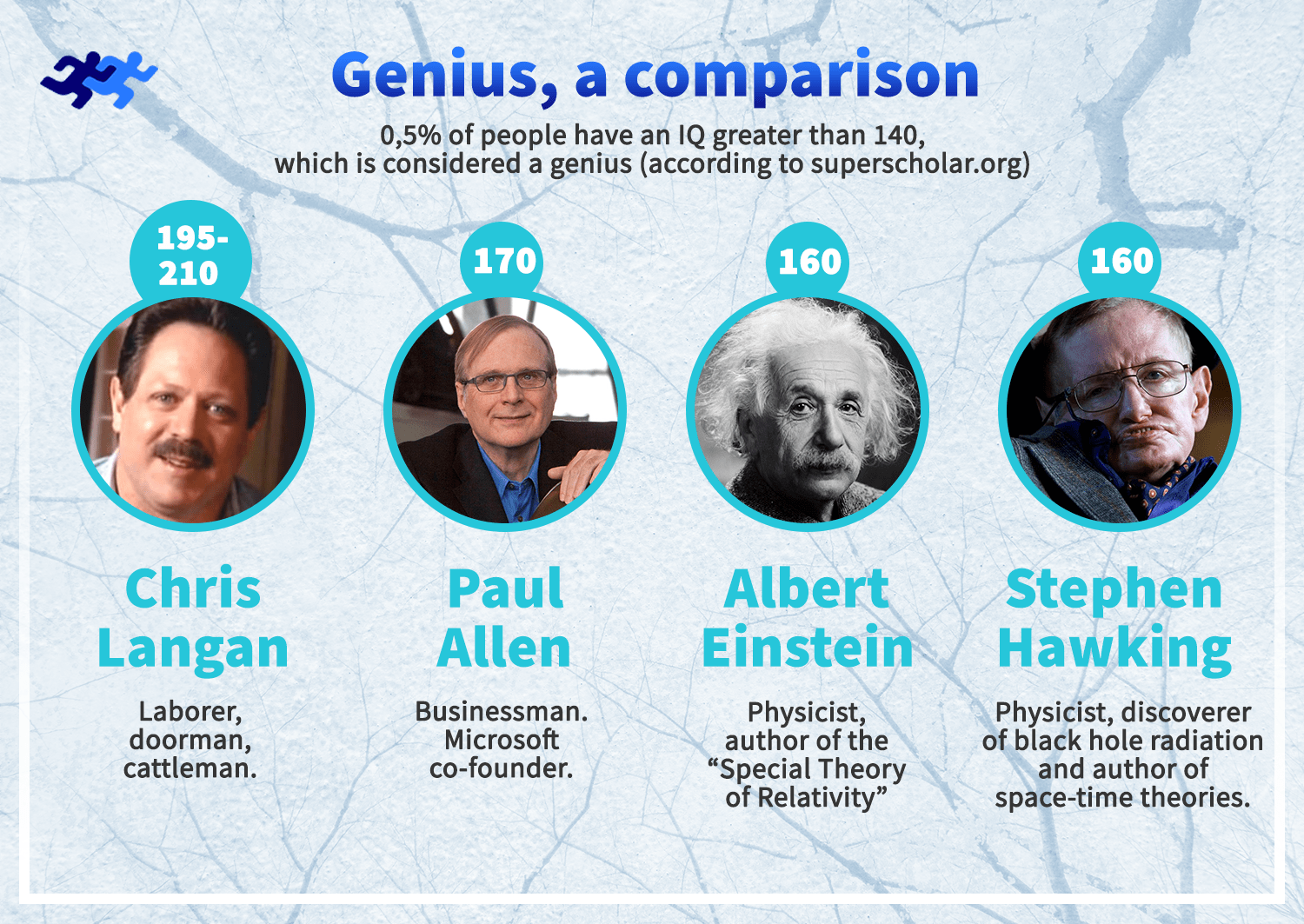 However, as we said, Chris has not invented any software, has not discovered any theory, nor has it gone down in history because of its contribution to science. It is only part of a list of people with the highest IQs. Why?

Langan’s origins speak for themselves. His mother, a native of San Francisco, lived apart from his family. He had four children, of which Chris was the oldest. His father disappeared before he was born, it was said that he had died in Mexico. The second husband was killed, the third killed himself. And the fourth was a failed journalist named Jack Langan.

Poverty in this family was devastating. Langan himself spoke thus of the situation:

“To this day, I have not met anyone who suffered in their childhood from poverty like my family suffered. We didn’t have a pair of equal socks, but holes in the shoes. And in the pants. We always wore the same clothes. I remember with my brothers washing our only clothes in the bathtub: we did it naked because we had nothing else to wear.”

The man who gave him the last name got drunk, disappeared for days. He used a whip to keep the children quiet. He didn’t keep any jobs and dragged the family from one city to another.

And, among all this misery, Chris was a genius: 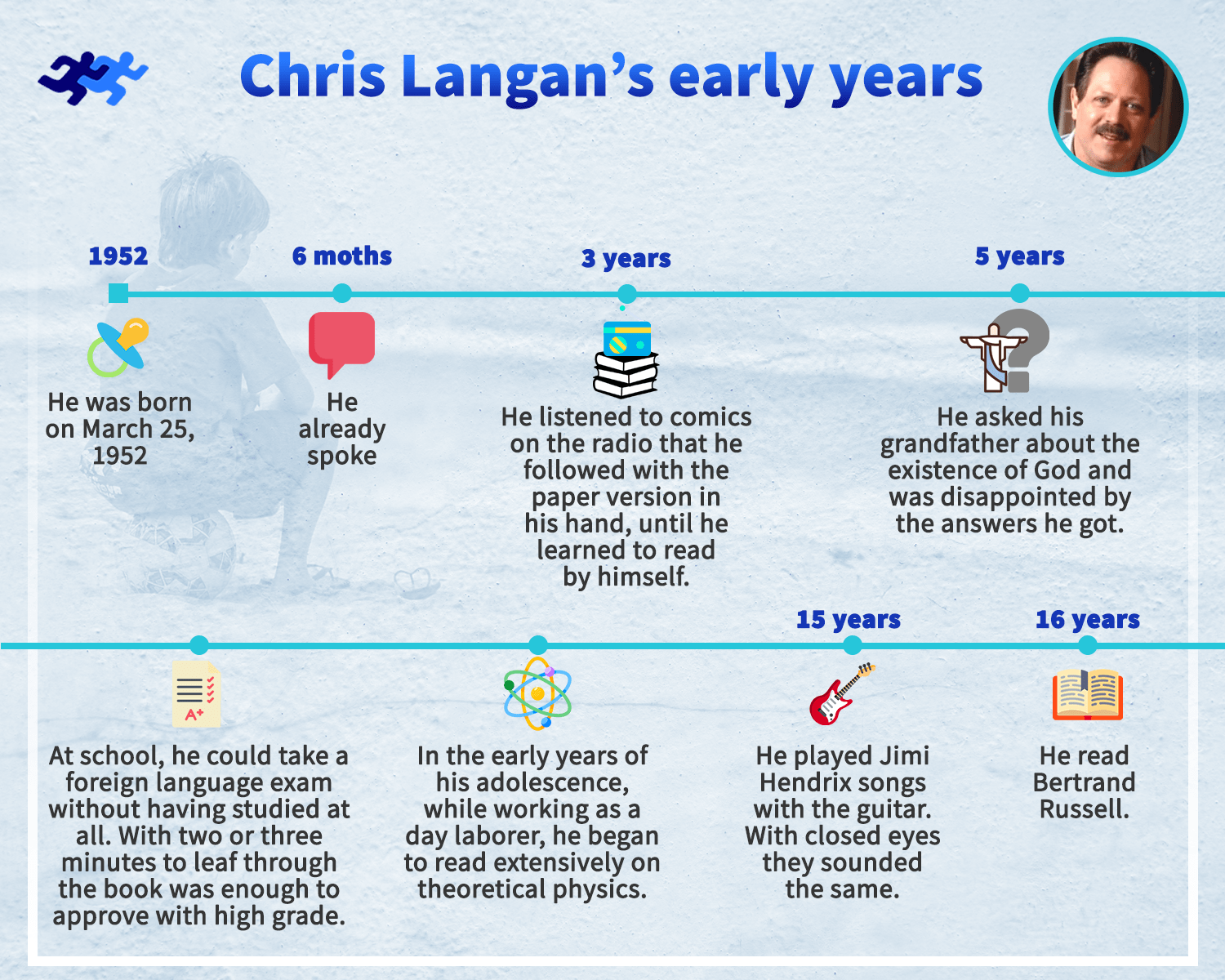 Chris did not usually go to school, just to take the exams. With a couple of days it was enough to absorb the subjects of a semester. The school was not prepared to treat a boy like Chris. In the words of his brother, Jeff: “I don’t think the school ever understood how genius Chris was.”

When he graduated from high school, Langan was offered two scholarships, all include: one for Oregon Reed College and one for the University of Chicago. He chose Reed and, as he himself acknowledge, he was wrong. The culture shock was too big.

Langan was a boy with shaved hair who had been working as a day laborer during the summers in Montana and he was surrounded by boys with long, perfectly groomed hair, and a fairly easy past in New York. He fled to the library.

He lost the scholarship and to have it renewed, his mother had to submit a family financial statement. He did not or did not do it on time. The fact is that the scholarship was not renewed. He left the university and returned to Bozeman (Montana), where he worked in construction and as a forest services firefighter for a year and a half.

He later enrolled at Montana State University. However, he also resigned, especially after a transport problem. He could not attend classes in the morning, because he had dropped the transmission of the car and asked the teacher if it was possible to do it in the afternoon. They denied it with these words: “Look, son: after seeing your file at Reed College, I see that you still have to learn that everyone has to make sacrifices to get and education. Petition denied.” The dean’s answer was the same. Langan lamented that he knew more than the teachers.

From that moment, he worked in multiple jobs, all as a pawn: construction, administrative, etc. Although he continued studying on his own: philosophy, mathematics and physics but without academic credentials. He wrote a treatise, the “Cognitive Theoretical Models of the Universe” (CTMU) or as he called it: “a true story of everything” a cross between the “Participatory Universe” by John Archibald Wheeler and the Stephen Hawking’s “Imaginary Time” cosmology theory.

Chris was born smart, yes. However, IQ is a measure of innate capacity, while social common sense is knowledge and must be learned. This last capacity is a set of skills that are developed, that come from somewhere; and it seems that the place where we get this kind of skills and abilities is in our family environment. And, as we have seen, in his family environment he did not learn them.

In addition, he did not have “luck” at school either. If someone had recognized his intelligence, and if he had come from a family that valued education, he would have ensured that he did not get bored in class and did not give up the University. Even if he could have chosen the one that best suited him.

“In addition, he did not have “luck” at school either. If someone had recognized his intelligence, and if he had come from a family that valued education, he would have ensured that he did not get bored in class and did not give up the University. Even if he could have chosen the one that best suited him”

Chris Langan had to make his way alone, and nobody – not the rock stars, not the professional athletes, not the software millionaires, not even the geniuses – have never achieved success alone.